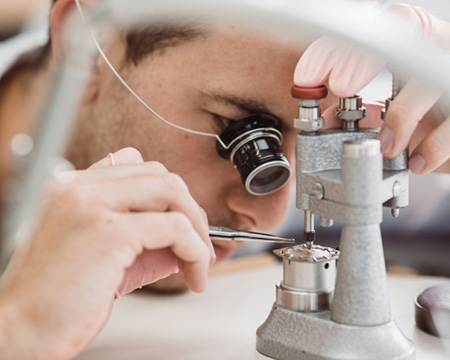 At Avantist, we believe that everyone on a path to creating their own legacy builds on the stories of those who went before. Our Legend series incorporates meaningful elements from the lives of these inspiring forerunners — such as string from a championship-winning tennis racquet — within its watches. If you wear an Avantist Legend timepiece, you carry with you a physical and everyday reminder of the strength and tenacity that underlie some of the greatest careers in history.

The Avantist Martina Navratilova Legend Series was launched in the summer 2017 at Wimbledon. The location was of particular significance, as Wimbledon is where Martina lifted her very first championship trophy four decades ago in 1978.

Embedded in the dial of each watch in the Martina Navratilova Legend Series is string recovered from racquets that Martina used to win her most memorable championship titles. There are five models in this series, differentiated by the racquet from which the embedded string was obtained.

Due to the challenges of recovering a viable quantity of string from racquets that are up to 36 years old, each model is limited to fewer than 50 pieces each.

The case profile of the Avantist Martina Navratilova Legend Series timepieces is designed to recall the shape of a tennis stadium. The four screws at each corner of the bezel are functional and deliberately left exposed to reinforce the strength of the case aesthetic.

Each dial contains 2 inches of racquet string, taken from a championship-winning racquet of Martina Navratilova’s remarkable professional career. The strings differ in appearance according to their age and composition.

Particular care was taken to ensure the string remains fixed and stable within the dial. Each segment of string is first mounted in a metal ring, which is then set into the watch dial.

Every watch in this series contains a piece of history that finds its strength and enduring appeal in the unequalled accomplishments of Martina Navratilova — the first Avantist Legend.